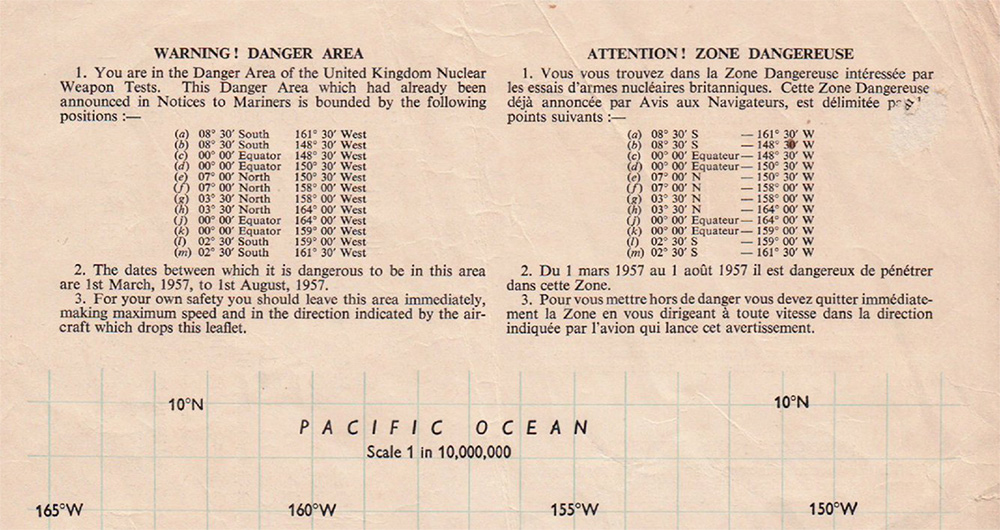 This is a leaflet produced by the British government in 1957 and intended to be airdropped over the Pacific Ocean.

Unlike most airdropped leaflets, this one isn’t propaganda – it’s a very real warning to get out of the area, or risk being nuked.

Operation Grapple was a series of nuclear weapons tests carried out by the UK in the Pacific from 1957 to 1958. The first tests, Grapple 1, 2 and 3, featured Britain’s first ever thermonuclear weapons – what most of us know as hydrogen bombs. Up to this point, Britain had had fission (‘atomic’) bombs, but H-bomb tests by the U.S. and Russia in 1952/53 meant the UK had to be seen to be up-to-speed. Britain had to test its own H-bomb or risk losing its place on the world stage.

The first set of Grapple tests took place at Malden Island, which had been a British territory since its discovery in 1825 by Lord Byron (no, not that one – the poet was the 6th Lord Byron; this was his cousin, the 7th). A small, remote triangle of low-lying land, Malden Island is located right in the middle of the Pacific Ocean, with no supply of fresh water. Prehistoric Polynesian buildings and temples are the only evidence of human habitation, and the island’s remoteness means they have never been properly explained.

In preparation for the 1957 tests, Royal Engineers built a runway and placed a target marker on the south end of the island. Single-sheet leaflets like the one shown here were then airdropped to advise vessels in the area to stay away.

These first Grapple tests didn’t perform as expected. In Grapple 1, a bomb design called ‘Short Granite’ delivered an explosion of 300 kilotons, well below its capacity. At 400kt, Grapple 2, detonated more spectacularly. But this design, ‘Orange Herald’, was actually a fission bomb rather than a thermonuclear weapon – something the government kept under wraps until after the Cold War ended. Grapple 3 (‘Purple Granite’) was expected to make up for the first test, but ended up exploding with a force of 150kt – half the yield of Grapple 1.

For political reasons, the failures were kept secret; Britain was keen to keep a grip on its status as a serious nuclear player. The first three Grapple tests were heralded as a success, and full details of the extent of the problems weren’t made public until decades later. Grapple was followed up by the much more successful Grapple X, which cemented the UK’s position as a thermonuclear power, and set the stage for the next 30 years of the Cold War.