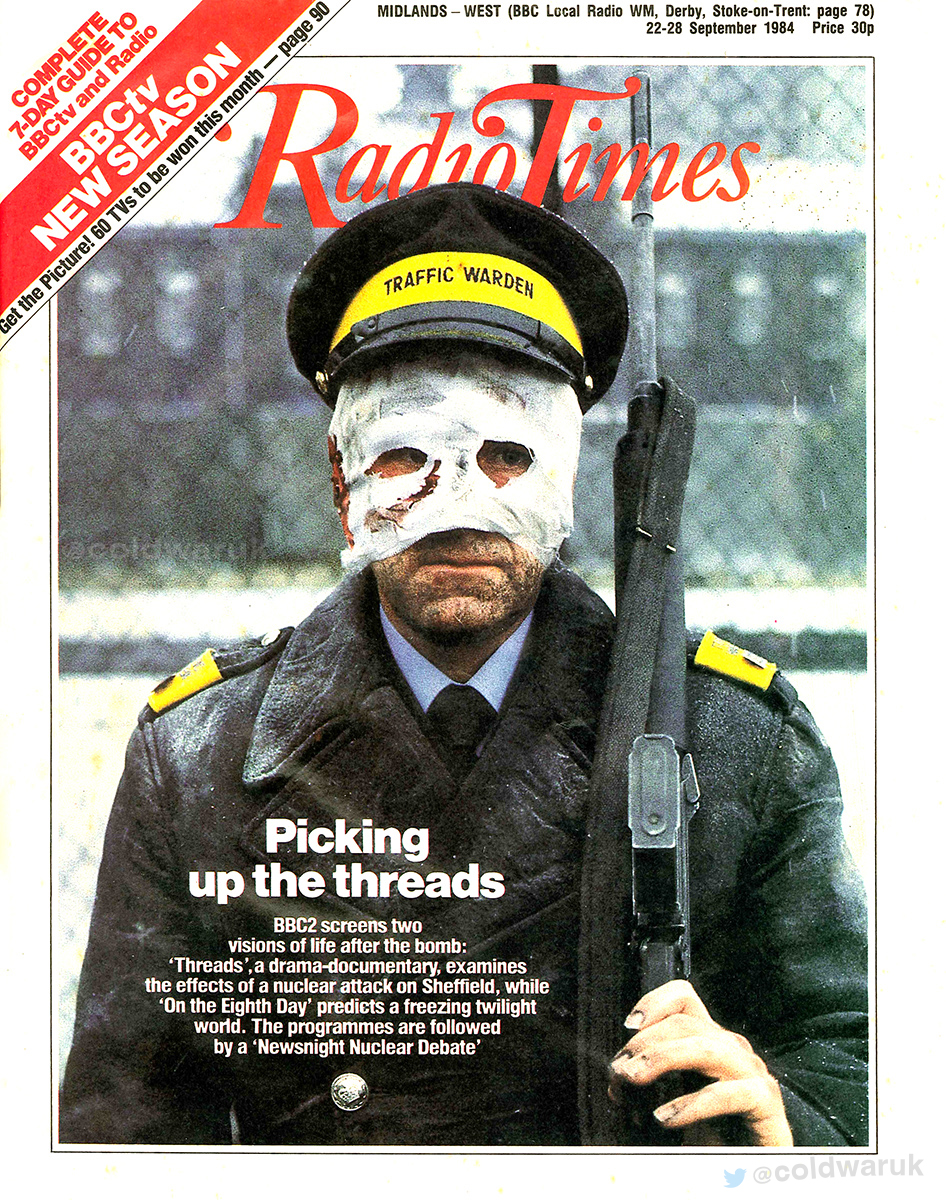 Today marks 35 years since the broadcast of Threads, the BBC’s docu-drama portraying a nuclear attack on Sheffield.

Still shocking today, the film is widely held to be among the more realistic depictions of the effects of nuclear war on British life. Although it has only been shown three times on BBC TV (in 1984, 1985 and 2003), Threads has had an ongoing impact on the British psyche.

Last year saw the release of a remastered Blu Ray of the film, which included a new director’s cut and plenty of extras. There’s never been a better time to revisit this powerful work of nuclear horror. Whether you’ve seen threads hundreds of times, have only vague memories of the film, or have never seen it, this carefully remastered edition has something to offer.

Help from the Home Office

In researching Threads, director Mick Jackson actually had the help of the Home Office. He was allowed to observe a run of the training exercise, HOT SEAT, at the Home Defence College at Easingwold. HOT SEAT would normally only have been open to senior officers from organisations like local authorities, the Police and Fire services. It simulated pre- and post-nuclear attack situations in a fictional English county, and was designed to prepare officials for the real thing.

Jackson then requested a set of training notes from the exercise, which the Home Office reluctantly – very reluctantly – sent him. Their reasoning? “To refuse to let him have a copy of the notes could cause offence and give the impression that we had something to hide.” They decided against editing out anything embarrassing, on the basis that Jackson would spot the omission and play it up in his film.

Below you can see the original press releases for Threads, which was promoted alongside On the 8th Day, a documentary about the ecological impact of nuclear war, with a particular focus on “nuclear winter” (you can watch On the 8th Day online). Click or tap a thumbnail image to view the full page:

Picking up the threads

The Radio Times famously published its Threads special issue (which you can see at the top of this post) to coincide with the film’s original broadcast. This included several features on the film and its production.

One of these articles, Acting Armageddon by Jim Crace, gave some insight into the making of Threads. I have transcribed the article and you can read it here.

Back in the real-world Sheffield, a guide for local residents was published by the county council in September 1984 – the same month as the original BBC broadcast of Threads. This booklet was similar to those published by many other left-wing local authorities at the time, emphasising the destructive power of nuclear weapons, and detailing the death, injury and destruction of property that would result if the bomb dropped on Sheffield and the surrounding region.

It’s not clear whether the timing of the publication of South Yorkshire and Nuclear War: Information for the Public in the County of South Yorkshire was simply a big coincidence, or a well-planned strategy. The latter scenario is entirely possible; the local authority had already made a name for itself nationally for its extreme (for the UK) left-wing leanings, so piggybacking on Threads to deliver an extra blow to the Conservative government and its strong belief in Civil Defence is not out of the question.