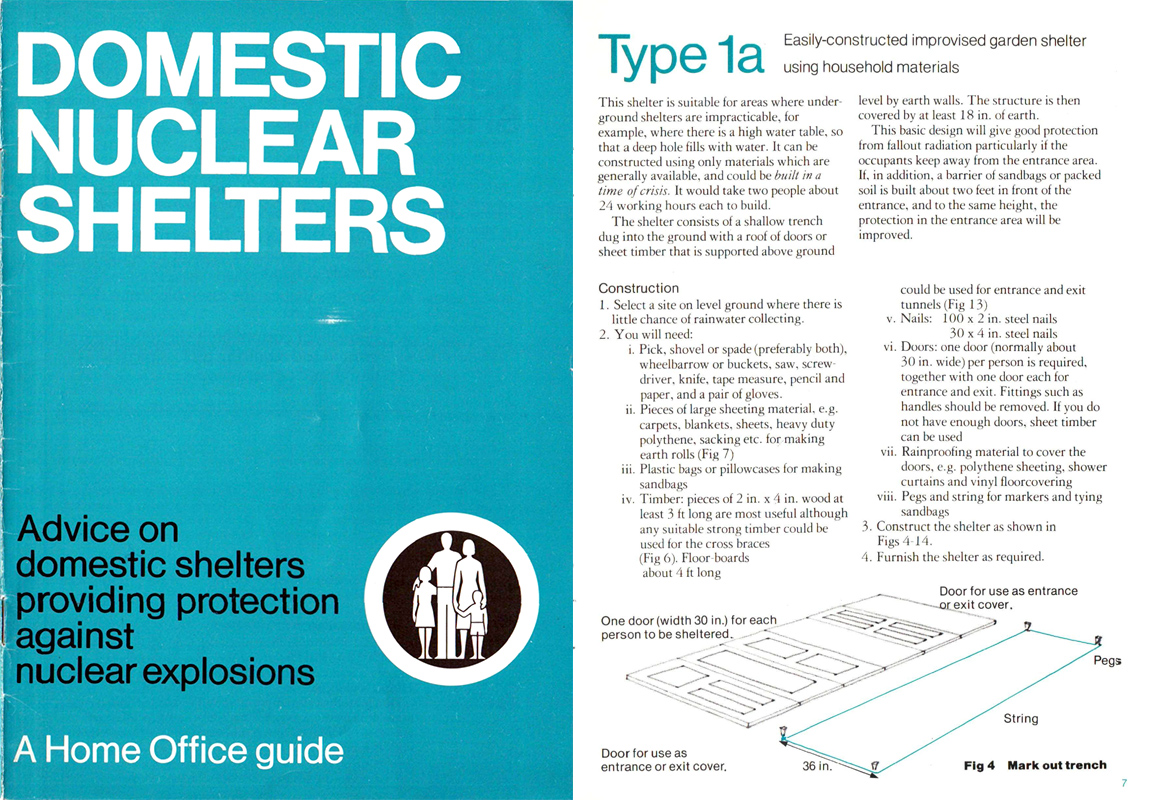 Domestic Nuclear Shelters was the UK government’s attempt to bring nuclear bunkers to the masses.

Whether you wanted a deluxe, professionally-installed bunker, or would make do with a hole in the ground with a couple of doors for a roof, this guide had you covered (in more ways than one).

It was published in 1981, and – as you may have spotted from the ‘nuclear family’ symbol on the cover – was part of the same public information campaign as the ill-fated Protect and Survive.

There were two publications under this name – Domestic Nuclear Shelters, a thin A5 pamphlet, and Domestic Nuclear Shelters: Technical Guidance, a beefier A4 book. The former was intended as the most basic introduction to bunker-building for ordinary householders, while the bigger tome was aimed at tradesmen and engineers (and maybe the more dedicated/paranoid amateur).

The guides were developed by the Home Office in response to growing public concern about nuclear attack. A working group was set up to develop the Technical Guidance manual on constructing nuclear bunkers, and it produced the larger manual, which ended up being revised and republished several times during the 1980s. This included several types of shelter, with plenty of technical information on how well-protected against blast and fallout each one would be.

Meanwhile, the Central Office of Information combined shelter designs produced by the Working Group with general information on building a bunker and stocking it with supplies, and advice on what to expect during nuclear attack. This formed the slimmer pamphlet version, intended for wider distribution, and priced at just 50 pence.

Curiously, one of the shelters depicted in both versions of the guide, the ‘Type 2’, is basically identical to the ‘Morrison’ shelter used in the Second World War – a glorified metal table to hide beneath. You can see this in the collection of images at the bottom of this post.

Pictured above is a contemporary copy of the draft version, which was quite heavily annotated and corrected. The handwritten changes in this draft made it into the final booklet. It’s dated 14 January 1980 in pencil at the top – just two days before The Times ran a series of revealing articles on the state of Britain’s Civil Defence, which brought the Protect and Survive booklet to the public’s attention. This date may be incorrect – but if the pamphlet was already nearly complete in early 1980, it’s tempting to speculate that the delay of its publication by a whole year may have been motivated by politics, rather than practicalities.

“Neither flesh nor fowl”

While the chunky Technical Guidance guide survived into the second half of the decade, the smaller A5 booklet did not. Early in 1983, the Home Office reviewed its publications on nuclear attack. The decision was taken not to publish a new edition of the pamphlet, but rather to merge the information into any future Protect and Survive-style booklet.

An internal memo in 1986 described the lightweight Domestic Nuclear Shelters booklet as “neither flesh nor fowl”, being “an odd mixture of superficial shelter information, descriptions of effects mixed with rationale, and Protect and Survive-style advice”. The option to further revise the Technical Guidance book was left open – albeit in a form “in which the word ‘nuclear’ is used as little as possible” – but the idea of a standalone pamphlet was ditched for good.

Here’s a further look inside that ditched A5 pamphlet. The shelters start out simple, and get more complex/expensive as you go through. Click or tap any image above to view a larger version.