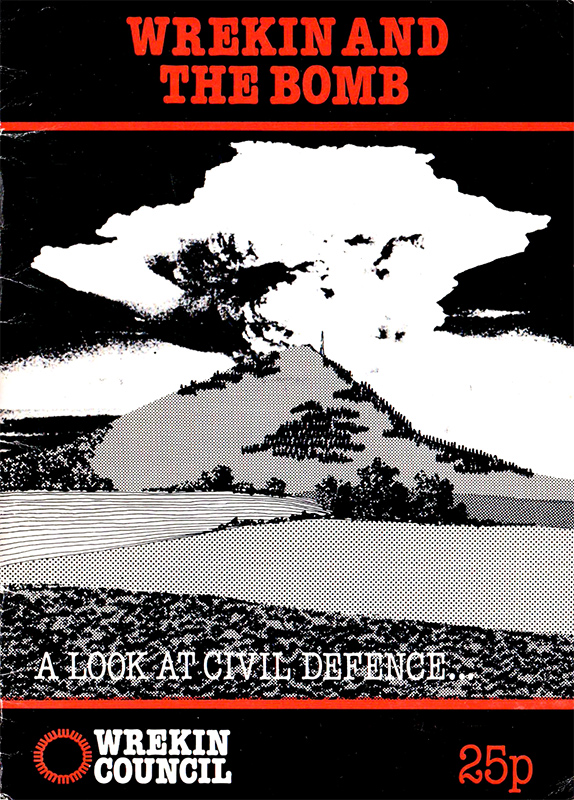 The beginning of the 1980s saw the UK government pursue civil defence with a renewed vigour. Local authorities, who were legally responsible for implementing civil defence preparations, were put under increasing pressure to demonstrate that they were prepared for nuclear attack.

Not all were happy to comply, however, and many left-leaning councils chose to fulfil their public information duties by publishing booklets critical of civil defence.

Wrekin and the Bomb, subtitled A look at Civil Defence, was published in the early 1980s by Wrekin Council, setting out their case against nuclear weapons and civil defence. Pictured on the cover is The Wrekin itself, the hill which gives this area of rural Shropshire its name, with a nuclear blast close behind.

The council’s reference to its “legal and moral obligation” refers to the regulations imposed on them from above, which gave central government the power to force councils to make preparations for attack.

The centre spread of the booklet shows what would happen if a 1 Mt bomb was dropped on the munitions depot at MoD Donnington, just north of Telford. This type of diagram is typical of anti-civil defence booklets produced by local authorities in the 1980s, and was designed to make the message hit home – literally! – for local residents. (You can click the images in this blog post to enlarge them.)

The booklet closes with a message of hope – and an encouragement to actively protest against nuclear weapons.

There are about as many versions of this booklet as there were left-leaning councils in the early 80s – which is to say, a lot. I’ll be sharing more of them in future blog posts.

If you happen to be in California (lucky you!) you can see some of my collection of local authority booklets for yourself. They’re on display at the Wende Museum of the Cold War in their current joint exhibition with the Wellcome Collection, War of Nerves: Psychological landscapes of the Cold War. The exhibition runs until the middle of January 2019. If you’re not in California (me neither), you can always download the exhibition catalogue (PDF) for a look at what they have on display.