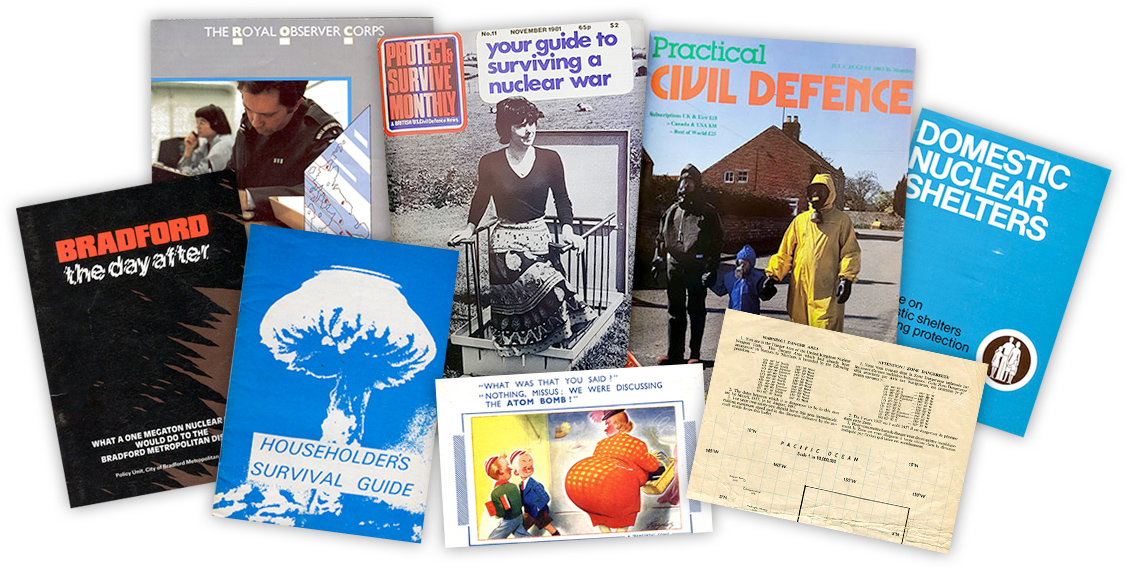 This is my blog, which loosely focuses on British civil defence and ‘domestic propaganda’ from around 1950-1990.

As a teenager snooping around my grandparents’ attic, I found a dusty copy of an early 1950s Civil Defence booklet called ‘Atomic Warfare’. This piqued my interest, and led – a few years later – to my first purchase: a copy of the infamous ‘Protect and Survive’ booklet.

Later still, as a postgraduate studying communication and public affairs, I based my Master’s dissertation on the items in my burgeoning collection of public information documents. Like this blog, it was titled ‘Communicating the Unthinkable’, and it looked at how the British government chose to communicate large-scale threats to the public.

A decade in the making…

I got a kick out of researching and analysing the documents, and decided to set up a blog. That was back in 2007. Real life got in the way, and I shelved the idea… for ten years. But I couldn’t stop thinking about it – or collecting.

The delay was probably for the best. My collection now contains well over 400 items, ranging from the curious, to the frightening, to the hilarious. Often, as with most Cold War stuff, it’s a bit of all three.

The scope of the items I’ve collected means I can make connections that wouldn’t have been possible when I was just starting out.

Beyond ‘ooh, wasn’t it scary?’

It would be easy, and probably quite boring, to just post scans of documents without any context or thought, perhaps with a bit of stock ‘wow, those were some scary times’ commentary. Instead, I want to share some more useful insight into these artefacts, joining the dots between them, and bringing them to life.

Please follow @coldwaruk on Twitter for updates to this site, and direct any comments or ideas to me. Now that’s out of the way… let’s get started. I hope you enjoy this frequently rather bonkers side of 20th century history as much as I do.

Thanks in particular to Danny Birchall, Prof John Preston, Dr Becky Alexis-Martin and Dr Nick Blackbourn for prodding me into finally getting this thing up and running.